A fore-edge painting is a scene painted on the edges of book pages. There are two basic forms, including paintings on fanned edges and closed edges. For the first type, the book’s leaves must be fanned, exposing the pages’ edges for the picture to become visible. For the second closed type, the image is visible only while the book is closed.

The fundamental difference between the two fore-edge styles is that a painting on the closed edge is painted directly on the book’s surface (the fore-edge being the opposite of the spine side). In contrast, the fanned fore-edge style has watercolour applied to the top or bottom margin (recto or verso) of the page/leaf and not to the actual “fore”-edge itself.

To begin a fore-edge painting artists clamped the slightly fanned pages of a book between the boards of a special press that held them in place while keeping pressure off of the cover boards. While the paints used for fore-edge paintings are watercolours, artists needed to use them carefully. If water was first used on the pages the paint would bleed through to the inner pages or remove the gold of the fore-edges. Artists needed to slowly build up the colours of the fore-edges to avoid over saturating the paper. Watercolour was the only paint that could be used when doing these paintings because others (acrylics and oils) would crack and crumble with age

A single fore-edge painting includes a painting on only one side of the book page edges. Generally, gilt or marbling is applied by the bookbinder after the painting has dried to make the painting completely invisible until the pages are fanned. 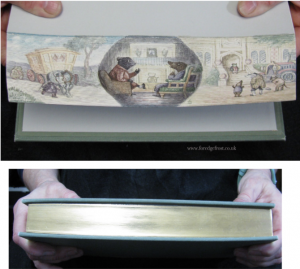 A legend regarding how hidden fore-edge painting on books first began states that a duchess and friend of King Charles ll of England would often borrow his books, sometimes forgetting to return them. As a result, the king commissioned the court painter, Sir Peter Lely and the court bookbinder, Samuel Mearne, to devise a secret method to identify his books. They worked out a plan to paint a hidden image on the edges. When the king visited the duchess, he spotted a familiar-looking book on a shelf. As he was leaving, he took the book from the shelf to reclaim. The duchess protested, but the king fanned out the pages of the book to reveal the royal coat of arms

Research by Cyril Davenport (1848 – 1941), former Superintendent of Bookbinding at the British Museum gives some credibility to the legend above, naming Samuel Mearne the mastermind behind the “mysterious” art of fore-edge painting during his service as the bookbinder for King Charles II from 1660 to 1683. Further research by Davenport turned up instances of these early fore-edge paintings having been signed by “an artist of the name of Fletcher” (no first name given). Davenport reports a 1641 copy of Acts and Monuments bearing a fore-edge portrait of Charles II, signed by “Fletcher” as the earliest known example of the art.

Further research, though, suggests that Davenport’s focus on only works linked to royalty may have caused his oversight of prior fore-edge paintings outside the royal libraries. Carl J. Weber, fore-edge scholar, suggests that fore-edge painting may have been in practice 7–10 years prior to Mearne’s “invention”. He lists a fore-edge painted copy of The Holy Bible as the first known instance of a signed and dated fore-edge painting. The painting on the 1651 bible is signed and dated by the artists: “S.T. Lewis Fecit Anno Dom 1653.” Although the signature “S.T”. was originally thought to be the initials of one man, Weber surmises that the work was produced by two (now) known fore-edge artists, brothers Stephen and Thomas Lewis.

Around 1750, the subject matter of fore-edge paintings changed from simply decorative or heraldic designs to landscapes, portraits, and religious scenes usually painted in full colour. Modern fore-edge painted scenes have many more variations as they can depict numerous subjects not found on earlier specimens. These include erotic scenes, or they might involve scenes from novels (like Jules Verne, Sherlock Holmes or Dickens, etc.). In many cases, the chosen scene will depict a subject related to the book, but in other cases, it did not. In one instance, the same New Brunswick landscape was applied to both a Bible and a collection of poetry and plays. The artist, bookseller, or owner decides on the scene; thus, the variety is wide.

The technique was popularized in the 18th century by John Brindley (1732 – 1756), publisher, and bookbinder to the prince of Wales. and Edwards of Halifax, a distinguished family of bookbinders and booksellers.

Carolin B. Currie was a prominent fore-edge painter in the late 19th and early 20th centuries. The number of her works are largely unknown, however the current estimate is around 131. She numbered her works in the flyleaf of the book painted. Because of this, we know that her fore-edge painting of “The White House in 1840” on a copy of Washington Irving’s Knickerbocker History of New York was her eleventh work. Also of mention is John Beer, of close geographical proximity to Miss Currie, both residing in Great Britain.

Not commonly mentioned is the presence of fore-edge paintings in China. Carl Weber, Shen Jin, and Yao Boyue all provide testimony that Chinese painters were influenced by Western fore-edge paintings and began practicing the art overseas. The evidence does not make a clear historical case, however it is an interesting factoid to note.

The majority of extant examples of fore-edge painting date to the late 19th and early 20th centuries on reproductions of books originally published in the early 19th century.

DISCLOSURE
We sometimes use affiliate links in our content. This will not cost you anything but it helps with the costs of keeping this website running. Thank you for your support.